As with all other freedoms, freedom of speech is not without its limits. However, the rise of the Internet has dramatically narrowed the boundaries of state regulations. Although countries like China and Iran have demonstrated that extreme Internet regulation can be achieved with the use of technical measures, Singapore has withdrawn from such an approach, using mostly non-technological methods.

In June 2013, the Media Development Authority (MDA), a Singaporean statutory body, implemented a new licensing requirement to regulate websites that are concerned with the news (Mda.gov.sg, 2013). The new requirement demands that all websites that publishes anything that deals with news to be licensed, and the websites are also required to put down a “performance bond” of 50,000 Singapore dollars. Any content that is deemed to breach the standards would have to be removed within 24 hours of being notified. The license will be valid for a year, and the MDA will determine whether the license needs to be renewed (Kennedy and Lee, 2013).

This new licensing framework applies to all “Singapore news program”, which is defined by the following two criteria:

1)    The programme (or newspaper, journal, etc) reports an average of one or more articles about Singapore’s news per week over a period of two months

2)    The content has significant reach by the standard set by MDA – more than 50,000 unique views within Singapore

In Singapore, just two companies, Mediacorp Private Limited and Singapore Press Holdings, primarily represent traditional news media. Temasek Holdings, which is one of the state’s sovereign-wealth funds, owns Mediacorp Private Limited, and Singapore Press Holdings, though not really affiliated to the government, tend to have a pro-government stance (Yuen, 2012). With the traditional media in Singapore being pro-government, the rise of other different news websites has been significant over the past few years, with Singaporeans accepting Internet news with alacrity.

MDA announced this new regulation just a couple of days before their implementation, claiming that “the new rules would bring news sites onto a more consistent regulatory framework with traditional news platforms which are already individually licensed” (Wong, 2014). The announcement also includes a list of ten websites that will need to be licensed. Out of the ten websites that were explicitly stated, nine of them are owned by the two companies. However, critics and netizens argue that having the nine websites in the list might just be a strategy to ease the implementation of the new regulation (http://www.economist.com/blogs/banyan/2013/06/regulating-singapores-internet).

The ambiguous term “Singapore news programmes” also gives the Media Development Authority the leverage to broaden its boundaries and include a wider range of websites that needs to be licensed. Although the Ministry of Communications and Information (MCI) confirmed that the bloggers would not be affected by the new regulation, the legislation apparently does not guarantee the same.

At a glance, it seems that this new regulation makes sense – why shouldn’t online media be subjected to the same regulations as those that pertain to other media platforms? Firstly, content online is already subject to laws concerning libel and slander; incitement to public disorder; sedition; and more. Secondly, those very existing regulations have resulted in Singapore’s appalling ranking in the world’s league tables for press freedom. Singapore is ranked 149th out of 179 countries on Reporters Without Borders’ list (Reporters Without Borders, 2013) and 153rd out of 197 countries in Freedom House’s list in 2013 (Freedom House, 2013).

On 6 June 2013, Over 150 sites participated in a protest against this new licensing regime by going on a twenty-four hour “blackout” (Kennedy and Lee, 2013). Participants in this protest had their websites blocked and redirected their users to a page called “Free My Internet”. The blogging community in Singapore started this online movement to protest against the new changes. There was a further protest on 8 June 2013, held at Hong Lim Park in Singapore (Kennedy and Lee, 2013).

"It is obvious that the new rules are to set and control the tone of discourse online, a concern which the government has had for a while now," said Andrew Loh, the editor of socio-political website Publichouse.sg (Jaipragas, 20143).

In 2013, this new licensing regime was limited to local Singapore based sites, which appears to include sites that are owned by foreign bodies but with the “.sg” domain name. It has been intended that the Singapore Broadcasting Act will be further amended in 2014 to more broadly cover any foreign news sites targeting the Singapore market (Kennedy and Lee, 2013).

An OB marker is a term used in Singapore to indicate whether certain topics are allowed for public discussion. OB marker is short for “out of bounds marker”, a term which is adopted from golf, where the marker marks the area beyond which playing is not allowed. Unlike golf though, the OB markers of Singaporean political discourse are not visible and distinct. George Yeo, Minister of Information and Arts at that time, first used this term “OB markers” in 1991 to describe the boundaries of acceptable political discourse (Cheong, 2013).

OB markers were not only not visible and distinct, it also depends on the political climate and may shift accordingly. This means that a topic that was previously permitted might be banned in the future, and vice versa. In 1999, George Yeo said that it is difficult to define what the OB markers are in advance (Cheong, 2013).

Singaporean blogger Lee Kin Mun, better known under his online alias mrbrown, is best known for his social and political commentary admist Singapore’s tight media restrictions. He is also the man behind the Mee Siam My Humps saga in 2006 (Tan, 2011).

The Mee Siam My Humps saga is a notable case involving the release of a series of podcasts and music videos where Singapore’s prime minister is seen represented by Internet pranksters. By the time the podcast was known to the political party, it was already too late for censorship because a huge number of citizens have already downloaded the podcast. The podcast was also made with deliberate ambiguity, where "the video says something without actually saying anything" (Tan, 2011).

On 30 June 2006, Lee wrote an article titled “S’poreans are fed, up with the progress!”, for his weekly opinion column in the newspaper Today about the rising costs of living in Singapore. Three days after his column was published, on 3 July, an official from the Ministry of Information, Communications and the Arts (now known as the Ministry of Communications and Information) published a reply in the same newspaper, calling Lee a “partisan player” whose views “distorts the truth” (Lee, 2006). On 6 July, the newspaper suspended Lee’s column, and Lee subsequently resigned from his column.

Singapore's Prime Minister Lee Hsien Loong responded to the unhappiness that resulted from Ministry of Information Communications and the Art's (now known as Ministry of Communications and Information) handling of the incident. He stated that "mrbrown had hit out wildly at the Government and in a very mocking tone", and that the government had to respond to such criticisms lest they be taken by the public as true. He also stated that national issues should not be debated in such a fashion (referring to Lee's article). The prime minister maintained that Singapore was an open society (Lee, 2006).

Leading politicians of the ruling People's Action Party (PAP) and government agencies have been known to use or threaten to use litigation against bloggers and other Internet content providers. The first instance of such activity was against Sintercom in July 2001 when the founder, Dr Tan Chong Kee, was asked to register the website under the developing Singapore Broadcast Authority Act (Tan, 2001). Dr Tan chose to shut down Sintercom due to concerns over the ambiguity of the Act.

In April 2005, a blogger, Chen Jiahao, then a graduate student at the University of Illinois at Urbana-Champaign, was made to apologise and shut down his blog containing criticisms on government agency A*STAR, after its Chairman Philip Yeo threatened to sue for defamation (McDermott, 2005).

In September 2005, three people were arrested and charged under the Sedition Act for posting racist comments on the Internet. (U.S. Department of State, 2005) Later, the Teachers' Union announced that it is offering legal assistance to teachers who want to take legal action against students who defame them on their blogs, after five students from Saint Andrew's Junior College were suspended for three days for allegedly "flaming" two teachers and a vice-principal on their blogs  (Davie and Liaw, 2005).

Lack of Self-Censorship within Individuals


With social media usage on the rise, literally anybody can be a content producer online. However, while bloggers and companies know the importance of self-censorship, there are many individuals in Singapore who got into trouble due to their failure of practicing self-censorship. Here are some examples: 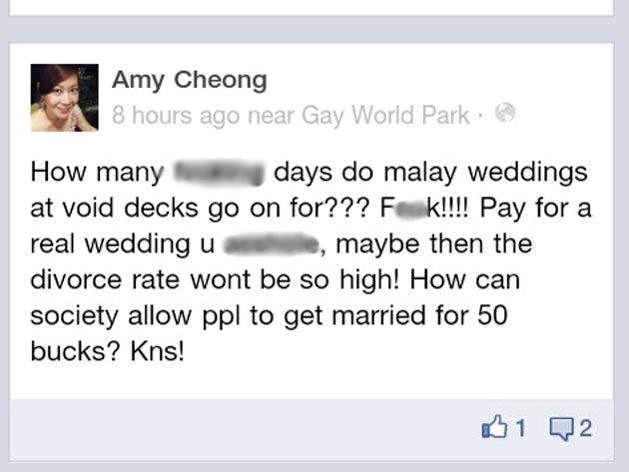 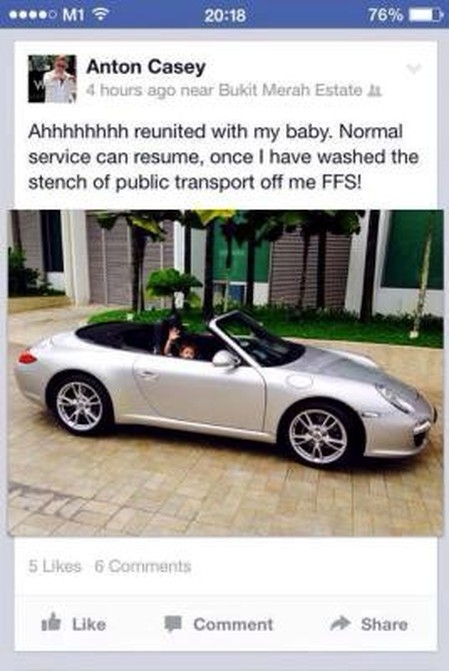 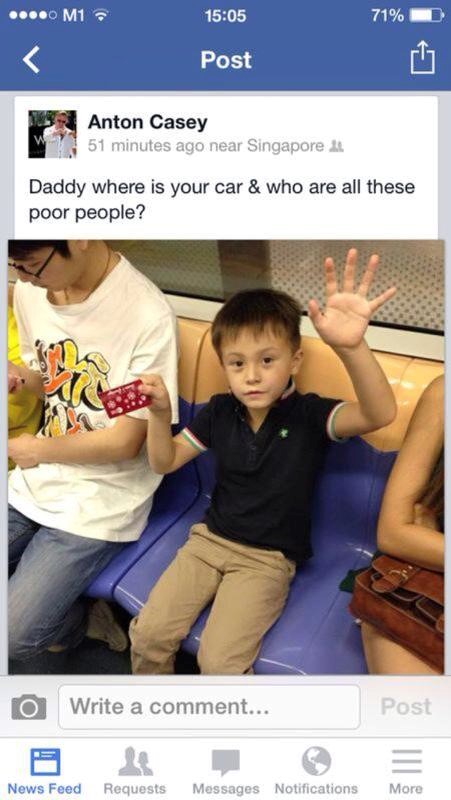 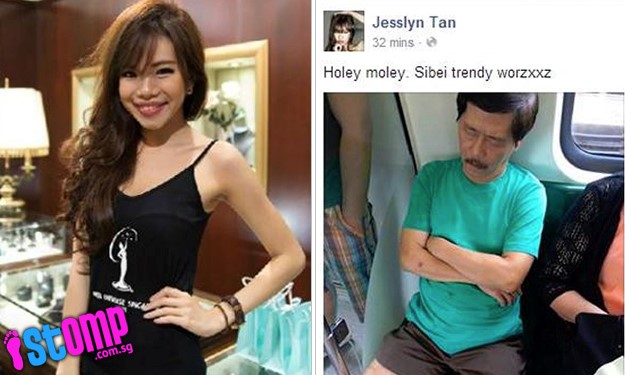 The lack of self-censorship online amongst individuals has also brought about a huge debate on whether it shows that Singaporeans are lacking basic morals and values. The incident where photos of 2 brother’s death in a horrible accident went viral was one such incident that led to the debate (AsiaOne, 2013). Passersby took those photos and uploaded them online. This not only shows the lack of consideration for the family members of the 2 brothers, but also shows that Singaporeans are becoming more self-centred – what is the purpose of letting the online world know that you have witnessed a tragedy?

However, it is to note that The Real Singapore is currently hosted in 3 different locations around the world. By doing so, they claim to provide their readers with secure browsing without any logs of cookies or IP on our website and also to protect us against cyber attacks, Domain Seizure or DMCA takedowns (The Real Singapore, 2014).

Although the Singapore government has refrained from using technological means to execute control over the Internet, all Internet service proversrs (ISPs) in Singapore are subject to regulation and restriction by the Media Development Authority (MDA). The regulation implemented by the MDA blocks a symbolic number of websites that contains "mass impact objectionable" material. (Lee, 2008)

Chapter 338 section 4 of the Undesirable Publications Act states that:

4. —(1)  For the purposes of this Act, a publication is objectionable if, in the opinion of any controller, it or (where the publication comprises 2 or more distinct parts or items) any one of its parts or items describes, depicts, expresses or otherwise deals with --

(a) matters such as sex, horror, crime, cruelty, violence or the consumption of drugs or other intoxicating substances in such a manner that the availability of the publication is likely to be injurious to the public good; or

(b) matters of race or religion in such a manner that the availability of the publication is likely to cause feelings of enmity, hatred, ill-will or hostility between different racial or religious groups.

It is difficult to completely censor the Internet but Internet censorship whether in the form of state intervention or self-regulation, is here to stay. While a balance has to be struck between the two, it is unclear if the right balance has indeed been achieved under the status quo. Though the reactions toward the recently passed licensing framework for news sites suggests otherwise, cases such as that of Amy Cheong appear to indicate that online citizenry is mature, thus paving a way to self-censorship. Although the government’s recent enactment of licensing framework shows that it is not likely to relax its stance in the near future, perhaps there is room for the hope that Singapore will witness a gradual change in the time to come.