A History Overview of the Internet in Malaysia

In 1987, Malaysia had its first Internet service provider with MIMOS (Malaysian Institutes of Microelectronics Systems), this served as the sole provider. The first Internet service in Malaysia, known as the “Rangkaian Komputer Malaysia” (RangKoM), connects all the universities in Malaysia to MIMOS to enable researchers from the universities to communicate with each other.  The main applications used at that time were e-mails and electronic forums (such as Usenet) and because the main users were mainly academicians and researchers, the information being exchanged were mostly academic related. JARING was then introduced as the first Internet provider to the public in Malaysia. By May 1997, JARING offered connection to 150 different countries.

The creation and growth of JARING laid the path to a new road for the telecommunications industry that eventually became a catalyst for many others to follow suit to provide Internet access to the people of Malaysia.

The Internet became the country’s priority during the rule of ex-Prime Minister, Tun Dr. Mahathir Mohamad. He promoted the idea of the ‘knowledge economy’ as an important part of his regime and proceeded with investing large sums of funds in the ‘Multimedia Super Corridor’ (MSC), this was also to attract foreign technology companies to increase the country’s value.

“MSC promotes and enables Internet access, even for the poor, and places few or no restrictions on online political content.” The Malaysian government made a public decision of guaranteeing an uncensored Internet, including foreign websites in the ‘Bill of Guarantee’. This was to help the IT growth within Malaysia.

However, in 2014, ex-prime Minister Dr. Mahatir recently made a statement stating that he would censor the Internet if ever re-elected. This is largely due to the political instability that he believes was resulted from an uncensored Internet, with organizations like Malaysiakini being one of the driving forces of political opposition.

“ In a guarded effort to maintain MSC credentials, Harakah’s (a Malaysian online newspaper) new daily Internet edition was left untouched.  It is clear that Mahatir’s promise to not censor the Internet has been kept; this is indicated by the growth of multiple new independent sites. The most popular among them would be Malaysiakini, Malaysia’s first critical online commercial newspaper. “ (Hilly 2001 , p 265)
Why Mahathir wants to censor the Internet?

The government has taken note of the Internet’s influence on the country’s political parties. The opposition's ability to leverage on the various media (especially social media) provided by the Internet is widely acknowledged as one of the key reasons for its increase influence in the last two general elections, especially in denying BN a two-third majority. The Internet has also provided an alternative to the mainstream media, which long has been controlled by UMNO and Barisan National.

Dr Mahathir said the Internet had contributed to social problems and the crime index, which had spiked recently. He said and I quote:

"Although I gave my word to the Multimedia Super Corridor adviser when I was the PM, I did not give assurances the Internet would not be filtered. At that time, I did not know what could come from the Internet," said Dr. Mahathir.

“Malaysiakini has become an institution for Malaysians seeking information on the Malaysian political system. Their stories embarrass the ruling coalition and possibly erode support for the party. “

(Retrieved from www.themalaysianinsider.com)
Pornography has always been a driving reason to why censorship has been implemented on the Internet. This is prevalent in Malaysia too. There exist quite a few articles that address this issue and a handful of studies that show the effects of uncensored internet access.

“Nov 18, Malaysiandigest.com - Unhealthy trend among the youths in Malaysia to mimic the liberal Western way of life propagated through billions of Internet sites, including many pornography sites. The report addresses the worrying fall out on the youth of absolute freedom of the Internet, associating it with the rise of rape cases.

It is estimated that 10 women are raped every day in the country, with many more going unreported. At least half of the victims are said to be children and teenage girls below 16 years old. Some pornography sites even deliberately target the young by registering website names that mimic children’s TV shows. Former Prime Minister Tun Mahathir Mohamad also stated recently that he thinks the Internet should be censored.”

According to a study conducted by the National University of Malaysia, 60% of Internet users in the country utilize it for entertainment and pleasure such as watching videos on YouTube and playing games. This has contributed to an  unhealthy culture of anti-social obessions including, playing video games, watching youtube videos and browsing social networks. Life online becomes more of a priorirty than actual reality and this is affecting their education.

To makes matters worst, pornographic videos are increasingly available on the internet and is seen to have heavy influence on teenagers and even children. Although pornography magazines and other similar material have been prohibited to enter Malaysia, the advent of ‘absolute freedom’ provided under the Communications and Multimedia Act 1998 and the Bill of Guarantees MSC related to the internet, has facilitated the speedy online spread of pornographic videos within the society and without censorship.

Mahatir claimed all this to be a result of the citizen’s abuse of Internet freedom.

Laws against freedom of speech

Even though the Internet is not officially censored in Malaysia. The government has superimposed laws that forces people to self-censor anything that they post online by enacting section 114A of the Malaysian Evidence Act 2012. Malaysia's Centre for Independent Journalism (CIJ), the second of two amendments to the Malaysian Evidence Act of 1950, also known as Section 114A, 'enables law enforcement officials to swiftly hold someone accountable (PDF) for publishing seditious, defamatory, or libelous content online.' 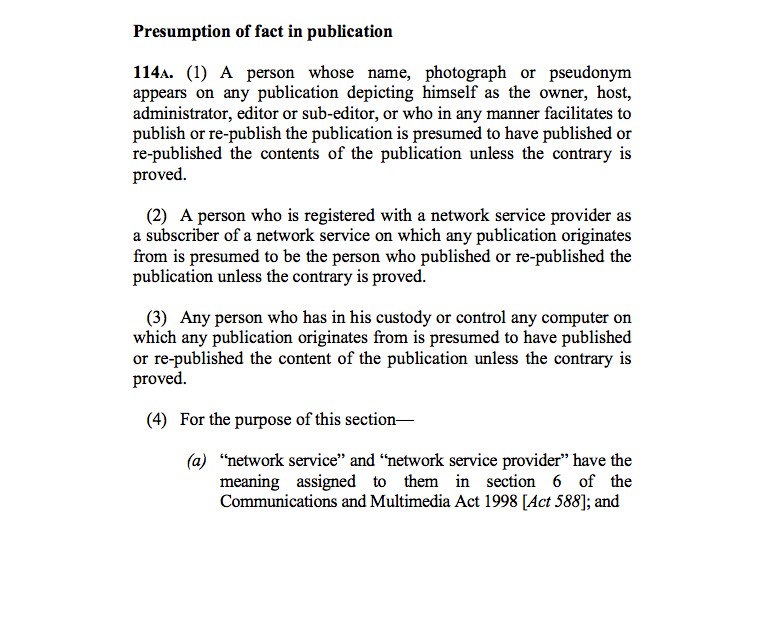 Such actions have led to negative reactions from the Malaysian public. Many Malaysians have sought to online media to fight for their freedom.

This is one of the petitions by Fight for the Future.

Why the Internet should not be censored

Malaysia is legally a constitutional democratic country. To fully operate as a democratic country there needs to be the existence of a check and balance through freedom and responsibility. The freedom of speech (expression) and freedom of information flow are vital for economic growth.

The balance inherent in democracy requires the creation of both these new conditions: freedom to do and freedom to answer, as an active process between many individuals. One clear way of ensuring a balance between freedom and responsibility is to make sure that, as many people as possible are free to reply and criticize. Responsibility is then not only a thing we ask other people to maintain. It is what we ourselves exercise, by the right to reply, the right to criticize and compare, and the right to distribute alternatives. All these rights exist in our society, in a general way. Yet many of the institutions of communication are so large and powerful that they become, in their way, separate empires. Individuals and organizations are free to criticize them, but such criticisms can easily be isolated and set aside as unrepresentative or even irresponsible (in fact, for lack of information, it sometimes is irresponsible in the sense that it is wrong). The question is whether we can find ways of ensuring free and responsible comment and criticism, and of distributing the actual range of work.


In the early days of his administration, Mahathir had also often reminded the local press of its role in society, to be ‘socially responsible’ to the public in its reports. His philosophy is:

‘For a society precariously balanced on a razor’s edge, where one false, or even true word can lead to calamity, it is criminal irresponsibility to allow that one word to be uttered.’

In other words, he is telling the press to apply self-censorship or face the consequences of being censored.

It is assumed that whoever is caught posting such materials will be 'assumed to be guilty until proven innocent,' this goes against the traditional judicial processes whereby the individual is innocent until proven guilty. The CIJ warns that 'if allegedly defamatory content is traced back to your username, electronic device, and/or Wi-Fi network, Section 114A presumes you are guilty of publishing illicit content on the Internet.'

There has also been the emergence of many privately run projects that tackles the idea of censorship. One of these includes SIANR PROJECT.

The Sinar Project is an initiative using open technology and applications to systematically make important information public and more accessible to the Malaysian people. The Project aims to improve governance and encourage greater citizen involvement in the public affairs of the nation by making the Malaysian Government more open, transparent and accountable.

According to the surveillances done by SINAR PROJECT, it was stated that a number of YouTube videos and Facebook pages of opposition parties and on-line news media had been blocked through what looked like ISP level packet filtering of network traffic. The page then tracks the known problems and works out ways for the public to access information.

The Internet Blackout Day is part of a campaign to call for the withdrawal of the new Section 114A in the Evidence Act 1950, otherwise known as Evidence (Amendment) (No. 2) Act 2012. It began on May 31, 2012 when CIJ launched an online petition to call on the government to withdraw the Evidence (Amendment) (No. 2) Act. The petition, which received more than 3300 signatures, was handed over to the Deputy Minister in the Prime Minister’s Department VK Liew in Parliament on June 26, 2012.

Online personalities, bloggers and even politician (majority opposition leaders) participated in the Internet Blackout Day by disappearing online for a whole day. There was no status updates on the facebook pages, no tweets, nothing.

New sites:  FreeMalaysiaToday, Malaysiakini, Digital News Asia, The Nut Graph, bfm, Merdeka Review, and party organ news sites Harakah Daily and Keadilan Daily that also participated by having a pop up of the 114A campaign on their news page.

On twitter: Users @sultanmuzaffar – who has 248,119 followers and @klubkiddkl with 223,105 followers also participated in the campaign.

The Blackout Day was organized to promote public awareness regarding internet freedom. The campaign recreated a day where there was no longer internet freedom and what it would look like. Since then, the members that begun the 114A campaign have brought their petition to Parliament.