Internet censorship in the United States of America (which will be referred to as America within this document) does not attempt to limit the right of free speech. The right of freedom of speech in the America is a constitutional right, stated in the first amendment.

Congress shall make no law respecting an establishment of religion, or prohibiting the free exercise thereof; or abridging the freedom of speech, or of the press; or the right of the people peaceably to assemble, and to petition the Government for a redress of grievances. (First Amendment to the United States Constitution, 1791)(Legal Information Institute, 1992,Para 1)

According to the Children Online Privacy Protection Act (COPPA), Children Online Protection Act (COPA), Children's Internet Protection Act (CIPA) and Digital Millennium Copyright Act (DMCA), censorship is necessary within America, as it is key to Parental Control, Internet Economic interest and Security concerns (OpenNet Initiative, 2007, Para 8 9 10). The control of this Internet in America is not focused on the censoring or removing of illegal or unwanted content. Instead, according to the report (Wall Street Online, 2013, Para 1) leaked by Edward Snowden in 2013, America has a global Internet surveillance program. This program allegedly was created to collect information from the electronic communication of million people.  As John Pilger, Australia-British Journalist states, “in the US, as in Britain, serious dissent - free speech - has been substantially criminalized. That give us some question, what’s the target of surveillance?“ (Pilger, 2011)

In 2007 the National Security Agency (NSA) launched PRISM and Upstream to collect the electrical data from major Internet service like Facebook Google and the others. PRISM is a government code name. 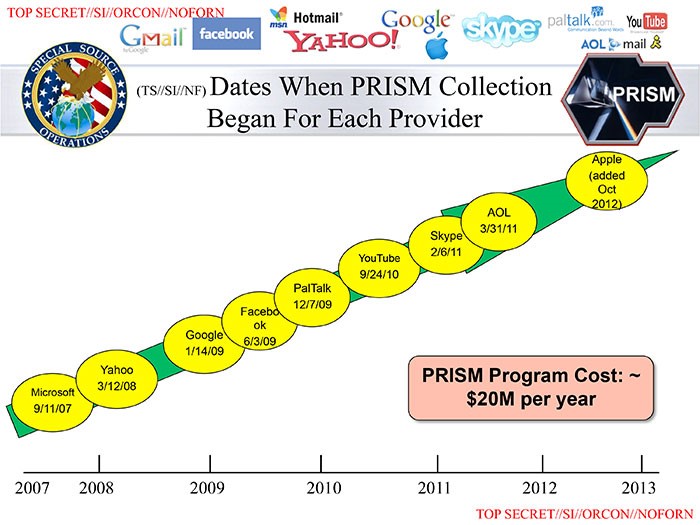 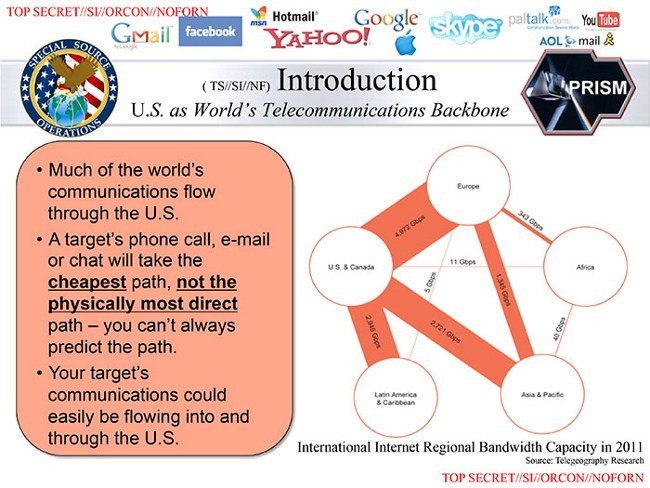 The PRISM program was intended to be protection from terrorist risks (King, 2013). NSA Director Keith Alexander said surveillance program have helped thwart more than 50 “potential terrorist events” around the world since 911 attacks (King, 2013). The PRISM program disrupted 90% of potential terrorist incidents (King, 2013). Including disrupting an attack on the New York Stock Exchange in 2010.The PRISM Program extends its reach outside of America’s borders and has been used in the Counter Terrorist War in Afghanistan. The North Atlantic Treaty Organization (NATO) has worked with the PRISM program in Afghanistan (Special Online, 2013). NATO forces received information about targets in Afghanistan, which includes emails, pictures, locations and phone records from NSA (Special Online, 2013).

The PRISM program is also a part of US International Strategy (Lepore, 2013). This program has allowed the US National Security Agency (NSA) not only the power to indiscriminately collected information on the electronic communications of tens of millions of people but also the heads of state of other allied countries (Lepore, 2013). German Chancellor Angela Merkel is among the victims of this program, resulting in the weakening of the relationship between Germany and America (Rawlinson, 2013). The information leaked by Edward Snowden indicated that the NSA monitored Merkel’s Cell Phone for eleven years (Rawlinson, 2013).

“Among close friends and partners, as the Federal Republic of Germany and the US have been for decades, there should be no such monitoring of the communications of a head of government. This would be a serious breach of trust.” “Such practices must be stopped immediately.” Angela Merkel Said. (FDL News desk, 2013)

The President Obama heavily denies these claims. (Rawlinson, 2013). The Chinese Telecommunication Corporation is also the target of surveillance. In 2014 the New York Times reported that the NSA has a covert program against Huawei (Chinese Telecommunication Corporation) since 2007 (Samson, 2013). Huawei has been describing as a “National Security Threat” by House Intelligence Committee in 2012 (Kashyap, 2014). And is also the biggest competitor of CISCO.

America People fear lose the right of free speech, that’s the reason that American against most law of censorship the Internet. However America have huge losses from Cyber Crime every year. Cyber crimes in America are always hiding behind the name free speech. (Eweek, 2014 p1) The government always tries to find out the solution to anti-cyber crime. It will be easy to find out the suspicion website, but it’s hard to find out criminal suspect. If Internet provider just simply block the suspicion website, it may limited free speech of Internet. It will also bring a trust issue between Internet provider and Netizens(Mackinnon 2011) How to protect online environment have became a major issue.

The progress of American build their Internet Censorship System is slow, but not difficult at first few years. The controversy point of Internet Censorship is the free rights of speech. Back to 1996, the first of Censorship law Communications Decency Act (CDA) has been enacted, which attempted to regulate Cyber Crimes and obscenity in Cyberspace. However after few months, in the case of Reno v. ACLU (Sieger 1996 p1), Federal judges in Philadelphia struck down the CDA, that’s the first victory for Netizens got their right of free speech. (Sieger 1996) Between 1997 and 2000. America enacted Children Online Privacy Protection Act (COPPA), Children Online Protection Act (COPA), Children's Internet Protection Act (CIPA) and Digital Millennium Copyright Act (DMCA) to protect children and Internet Economic Interest. (Oder. 2002 p1)

After 2006, the progress of build Internet Censorship System became difficult. After 911-attack, because of America under terrorism threat, America government was looking for regulate the whole Internet environment in an emergency situation. Between 2006 and 2013, there were 6 proposed federal legislations (Deleting Online Predators Act, Protecting Cyberspace as a National Asset Act, Combating Online Infringement and Counterfeits Act, Stop Online Piracy Act, Protect Intellectual Property Act and Cyber Intelligence Sharing and Protection Act) have came out. However none of them became law. Just because all of these 6 proposed federal legislations involves block website and against the right of free speech. It has been described Great firewall in America. (Mackinnon 2011)

The free right of Speech doesn’t keep terrorism threat and any other threat away from America. If American Netizens don’t let the Internet under the oversight of Law to anti Cyber Crime, Internet Surveillance will be the only choice to stop Cyber Crime and terrorism threat. Government has responsible to keep Internet Safety. In Daniel Gallington opinion, the responsible of government should conclude that:

1.         The expectation of Internet privacy does not, should not – never has and never should – extend to spies, terrorist and criminals

2.         Government should be monitoring the communications of these people, whether they are encrypted or not (and perhaps especially if they are)

After 911 attacks, US President George W Bush established a new program called Terrorist Surveillance Program, which was a program under the overall umbrella of the war on terrorism. However this program has not mandated by Foreign Intelligence Surveillance Act. The controversy of this program caused it to be halted in 2007, after 6 years of operation. In 2007 NSA has made a new program to replace Terrorist Surveillance Program, prompting the beginning of PRISM.  PRISM is illegal by the standards of the American Justice Department (Electronic Frontier Foundation, 2014 p1) but as it does not require individual warrants, it overrules the law. It is able to achieve this as it operates under the authorization from federal judges, who oversee the use of the Foreign Intelligence Surveillance Act (Director of National Intelligence, 2013,p1).

Internet surveillance in a grey area of the law, it’s hard to say this program are spying on citizen or protecting America. The Director of the National Intelligence, James Clapper said that the PRISM program was directed only at foreigners residing outside the US. However most citizens in America didn’t trust James Clapper. (The voice of Russia, 2013, Para 2)  According to the information on the debate.org shows there are 86% people against PRISM program; most of this 86% people agree surveillance against personal privacy. However in another 14% people’s opinion, America need use PRISM program achieve US interests over that of other nations. (Debate.Org, 2014)

Although Internet Surveillance is a necessary part of censorship system, it also brings a trust issue between government and Netizens. Vladimir Jirasek, The director of Jirasek Consulting Service, notes that any government, democratic or totalitarian, likes power and information these days directly translate to the power. (Jirasek, 2013 Para 1) When Edward Snowden leaked valuable and incriminating information, shocked the American people, and the world. (Jirasek, 2013 Para 2) In Mark Engler’s opinion, it’s a trouble for interpersonal relations are particularly chilling--and it is a troubling expansion of past abuse source.

However Mark Engler’s also point out that many Americans have adopted a more serious indifference. If you have nothing wrong, you have nothing to hide. (Engler, 2013) This is reflected in the history of the American people, as a similar attitude was taken up during the Cold war towards communism or McCarthyism?

Mike Klindo’s article “The Hollywood Left and McCarthyism: the Political and Aesthetic Legacy of the Red Scare” presents an account of the consequences of McCarthyism in Hollywood during 1940 to 1950.  The article clearly summarizes pre-McCarthy Hollywood (prior to blacklisting) and how Hollywood’s leftist communities challenged capitalism. Many films made would not address communism directly, however films were still influenced by communist theories. This unintentional transmission of communist theories through their films overshadowed the original intent of transmitting information to inform the public. In 1950, Joseph McCarthy claimed that he had a list of 205 known Communists working for the State Department, this became the ‘black-list’. Due to the propaganda that flooded American media at the time, the masses supported McCarthy and his claims that Soviet Communism would be destructive to the American way of life. The Hollywood blacklist commenced in 1946. Artists were barred from work on the basis of their alleged membership in, or sympathy with, the American Communist Party. Any involvement in progressive political causes or a refusal to assist investigations into Communist Party activities, led to blacklisting. During the period of its strictest enforcement, the late 1940s through the late 1950s, the blacklist was never made explicit or verifiable. It directly damaged the careers of scores of individuals working in the film industry. In extreme cases, this lead to suicide or the emigration from the United States of America, the most famous example of the latter is Spencer "Charlie" Chaplin. (Klindo, 2010)

McCarthyism has been stop at 1956, however the culture of McCarthyism may still alive in America after 1956.

John Rhichard Pilger is an Australian-British journalist. In 1980, John Pilger’s documentary film Year Zero: The Silent Death of Cambodia has not got permission to release to the public in United State. The excuse from US government officer explained that wasn't censorship. They are into difficult political days in Washington. John’s film would have given them problems with the Reagan administration. John also point out that In British, there is more than 50 television film has not been released in public. The reason is this kind of film involved in North Ireland war. In 2001, The Lannan Foundation (An organizing dedicated to cultural freedom, diversity and creativity) was to host the US premiere of John’s new film, The War You Don’t See in Santa Fe. However all the activity has been cancelled in last minutes with unwarranted reason. In John’s opinion, there are many thing in America has been surveillance or censorship in illegal way, but nothing is proven. (Pilger, 2011)

Basic on McCarthyism in cold war and John Pilger’s personal experience, was NSA able to continue the culture of McCarthyism or create a culture of surveillance through blacklisting and parroted? Can we believe that the NSA keeps our data safe? How to protect our privacy? The answer from Vladimir Jirasek is the leakages of the government secrets so far show that such an objective is beyond reach and is most likely just wishful thinking. (Jirasek, 2013) Although government can give us lots of promise, there is no guarantee for all the promise.