The Australian Classification Board’s (ACB) responsibility is to classify “publications, films and computer games that are conferred on them under an arrangement between the commonwealth and a State or the Commonwealth and the Northern Territory” (Classification (publications, Film and Computer Games) Act 1995, s 4). This means that the ACB works with each state or territory when classifying a peace of media that comes under its derestriction (a computer game, film or publication). To classify a peace of media, they compare the content of the work to a table. For example, the table found bellow is used when classifying film. (National Classification Code 2005, s 3) 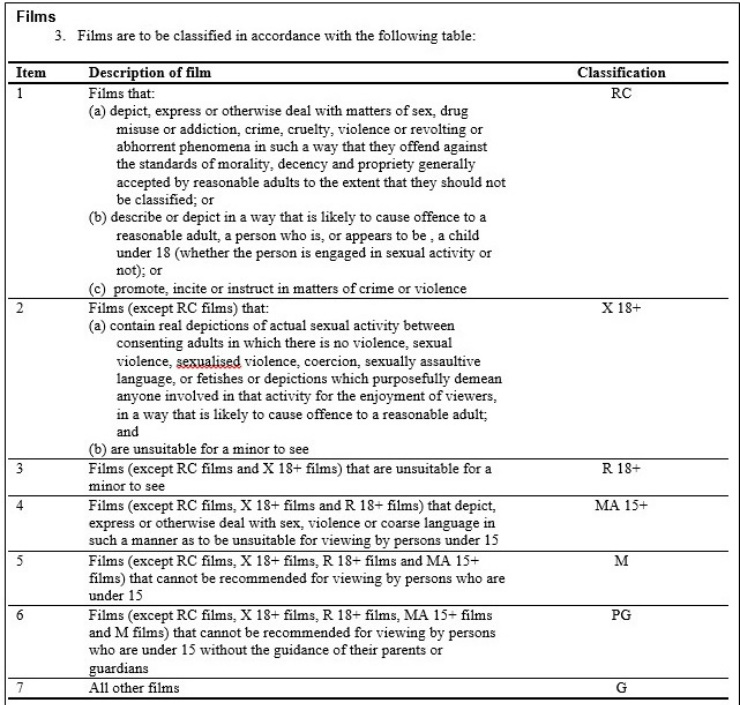 The ratings; G, PG, M, MA(15+), R(18+) and X(18+) are not only indicators for viewers  but legally enforced restrictions as well. The ACB adheres to the federal laws of classification (Classification (Publications, Films and Computer Games) Act 1995, s 3) and as such, retains the power to ‘refuses classification’ (RC) to any work. If a work is refused classification then it cannot be legally distributed within Australia. (Criminal code Act 1995, s 9)

The Australian Communications and Media Authority state within their Compliance and Enforcement policy that their obligations are ensuring that the community interest are met, that consumers are protected and that industry growth is encouraged (ACMA compliance and enforcement policy, 2010 p.2). This policy continues to outline main of ACMA’s intensions and purposes as an organization. (see bellow) 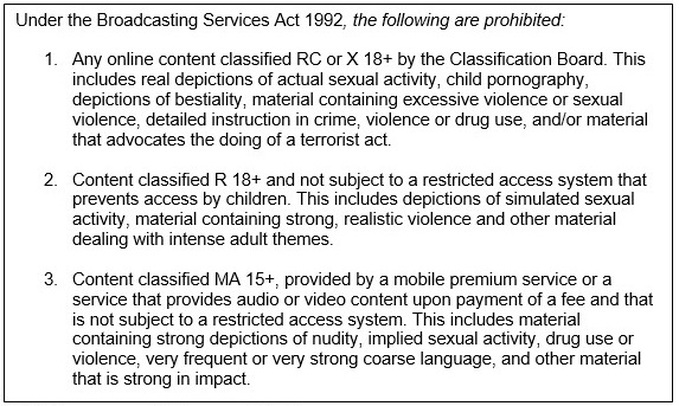 When content is discovered or reported to the ACMA which falls under the category of offensive and/or illegal material, a request is issued to the service provider to remove or prevent access to said content (Broadcasting Service Act 1992 s 205XA). ACMA also offers a reporting hotline for offensive online material (ACMA Hotline: local role, global action, 2014). This hotline works internationally with the INHOPE organisation, which aims to tackle the issue of child abuse. The trafficking of child pornography and other child abuse material is one of the main arguments for these legislations.

In 2012 the ACMA reported to have received 2,283 complaints about child sexual abuse materials. Of these, 1,282 where found to contain the offensive material, only two of these sites where hosted from Australia (ACMA Hotline: local role, global action, 2014).

Internet access is a human right (Carr, 2013 p.621) and as such the act of censoring or hiding any part of the Internet by a third party could be considered a breach of human rights. As the Internet propagates information more effectively that any other digital tool, the right to the Internet is the same as the right to freedom of expression, speech and press (Lucchi, YEAR p. 646). The Australian government has faced criticism over the censorship of the Internet, and have been called the ‘most restrictive in the western world” (Chen, 2000 p. 221). Former Australian Labour Party Minister for Broadband, Stephen Conroy faced criticism over his alleged attempts at censoring websites. In 2009 it was reported that Wikileaks had published the Australian blacklist of websites that the ACMA, under Conroy’s government, had created. This list was reported to include a number of pornographic websites with illegal content, but many websites that didn’t seem to hold any illegal or immoral content (Moses, 2009, p.1).

In 2010, the Australian government, attempted to implement a child filter on the Internet, which would be mandatory in all Australian homes. Due to the mandatory nature of this filter, the government and the ACMA where accused of attempting to control what adults saw (Levin, 2010, p. 48). Suzanne Dvoark from the Save the Children Fund was quoted as saying the ‘Curbing freedom of speech will not prevent the exploitation of children’ (Levin, 2010, p.47). As this program was never fully implemented, it is impossible to say what the final result would have been. Internet censorship continues to be a heavily debated topic in Australia.