Tumblr is a social micro-blogging platform that was launched in 2007, and allows users to easily share posts and other medias (Boutin 2009). The sight is one of the most popular social media platforms with over 186 million blogs from around the world. (Tumblr; press 2014). As a hub for information, sites such as Tumblr allow for ‘controversial and dangerous content’ such as content that praises and encourages eating disorders. (Norris, M. L., Boydell, K. M., Pinhas, L. and Katzman, D. K. 2006, p.443). These subcultures of pro-anorexia and pro-bulimia encourage purging and starvation as reasonable in perusing an, ‘ideal’ body image. These communities existing on the Internet is not a new phenomenon. However, the growth of social media has allowed these subcultures to spread their harmful messages (Edmons, 2012).

One way of dealing with these sites is to block them completely from users. However Dr. Gregory Jantz from Caring Online argues that such bans will not lower the prevalence of eating disorders, and our focus should be on helping change the message sent to these younger people that results in eating disorders (Edmonds, 2012). Tumlbr has taken this unique approach to this issue by implementing a public serves announcement, which prevents the user from seeing the content straight away. This “PSA-style warnings [appears] when users search tags that are popular…[such as] “anorexia, “bulimia,” “eating disorder.” … “pro-ana,” “mia,” purging,” thinspiration,” “thinspo,” and more” (Zafar, A. 2012).

Tumblr’s newest terms and conditions, which was implemented in 2014 states that “You agree that you won't violate Tumblr's Community Guidelines.” (2014, Tumblr- Terms of service) which states that tumblr is not to be used for “Promotion or Glorification of Self-Harm. … This includes content that urges or encourages others to: cut or injure themselves; embrace anorexia, bulimia, or other eating disorders; or commit suicide rather than, e.g., seeking counseling or treatment" (2014, Tumblr.com, community guild lines). These tags and sections of Tumblr still exist as the posting of images that shows thin people or admitting to be anorexic is not considered encouragement. Tumblr has stated that they “absolutely want Tumblr to be a place where people struggling with these behaviors can find solace, community, dialog, understanding, and hope … While we won’t allow blogs dedicated to triggering self-harm, we will not act against blogs engaged in discussion, support, encouragement, and documenting the experiences of those dealing with difficult conditions like anorexia.” (Tumblr.com, Staff - Follow up)The PSA, that Tumblr has implemented, has a simple statement of “Everything ok?” It urges users to seek help at listed phone numbers or websites, and even suggests other hashtags such as #NEDA. NEDA is the National Eating Disorder Association and worked with Tumblr to help stop these cultures. It is no exaggeration that these communities can be the most harmful to those suffering, as these communities “aim to offer and promote a community of support for individuals with AN [anorexia nervosa], allowing perpetuation of the eating disorder in the absence of treatment” (Norris, M. L., Boydell, K. M., Pinhas, L. and Katzman, D. K. 2006 p. 446). 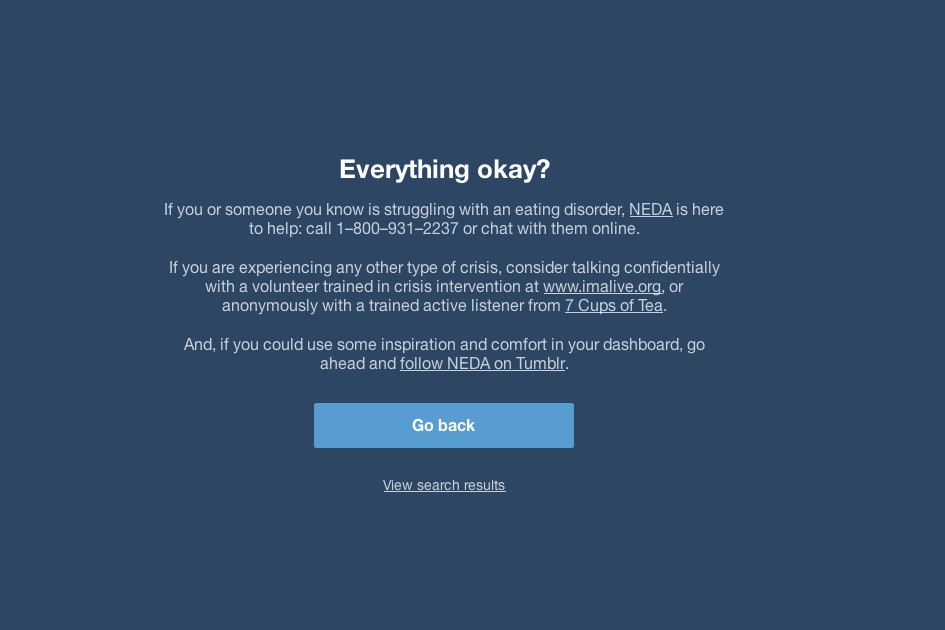 It is the culture that these communities create that is the problem. The material that is posed on line is a symptom of these values (Edmonds, 2012). One such example is the ana bracelet, which “aims to promote both a sense of community among followers and serves as reminder for the endorsement and practice of anorexic behaviours” (Norris, M. L., Boydell, K. M., Pinhas, L. and Katzman, D. K. 2006 p. 446). In this example, the Internet is being used as a tool to continue and grow this type of thinking. The PSA message that has been implemented by Tumblr is to act as a deterrent to this problem. While they have power and right to take down many of the dangerous content those details behaviours, they have chosen to leave up these ‘softer’ content. Tumblr stands by its ideals that the website is about sharing.

While this deterrent has only been put in place in 2012, it is too soon to tell how it has affected the ‘thinsporation’ community. Tumblr’s approach to how they censor there website allowed them to keep there integrity as an organisation, and being the process of dealing with these types of community’s.